skip to main | skip to sidebar

Koh Phi Phi comprises 6 islands 2 of them main.
Koh Phi Phi Don and Koh Phi Phi Leh, On Koh Phi Phi there are 2 villages and under administration of Ao Nang sub-district, Muang district, Krabi Province. The islands are surrounded by the Andaman Sea. 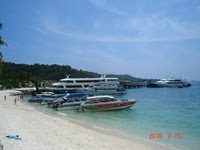 ***Ton Sai Bay : Ao Ton Sai is where most of the tourist activity is centered. The area contains restaurants, bars, hotels, and guesthouses.

***Laem Tong : Laem Thong is located at the very north of the island. 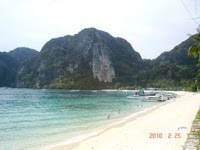 ***Lo Samah bay is located on the southern tip of Koh Phi Phi Leh, offering the remarkably breathtaking panorama. Its clear waters and its flourishing coral beds are good for skin diving.

***Maya Beach made famous as a location for the Hollywood film "The Beach" Great for snorkelling, lots of coral gardens and colourful fish, although can get a little busy in high season!

***Kayaking Many tourists use a kayak to see the natural environs and the island’s impressive features.
Cliff Jumping Cliff jumping is fairly new to Tonsai Bay. There are cliffs from 6 to 16m that are ideal for cliff jumping due to the depth of water below.
Bird Watching : Many rare birds are to be seen there: Gurneys, Finfoots, Bigwinged Brown Kingfishers, Egrets, Bitterns, Herons and more.

***Sailing and Cruising : Krabi has plenty of anchorages, usually deserted and all so pretty.
Fishing Fishers can catch the likes of marlin, sailfish barracuda and tuna.

***Spa : Spa service is available at the top hotels and resorts. 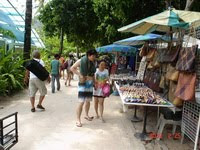 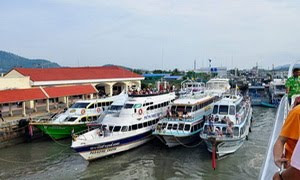 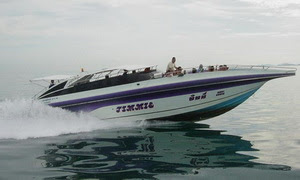 These usually carry passengers as well as vehicles across the sides.